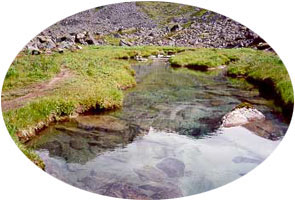 It makes up the greatest percentage of our human body structure and it can be found within anything alive.

Water is critical to life. All of life began within water and all of life depends upon it. Although we can live for around three weeks without food, we can only live for about 3 days without water.

Water is quite heavy. One gallon of water weighs 8 pounds.

Water is known as either "hard" or "soft", depending upon the concentration of minerals it contains. Soft water has less minerals than hard water and is better for soap making, clothes washing, and bathing. Rain water is a good source of soft water. Hard water is better for drinking than soft water because it has a higher mineral content and a better taste.

An underground spring or well can be an ideal source of drinking water as it is most often free from contamination from animals, toxic chemicals, and sewage treatment. Be sure to also check out the Humanure Handbook to learn one way to keep drinking water supplies uncontaminated.

Tap water is often treated with chlorine and fluoride. Both of these have been known to be toxic. It better for health to avoid using much treated tap water for drinking and cooking. Natural spring or well water is preferred.

In an emergency situation where water is scarce, it is said that one should simply drink whenever thirsty. Rationing water has not been found to prolong life. How much water a person requires depends upon how much water is within their body tissues.

Generally, we can survive on an absolute minimum of 2 quarts of water per day if the weather is cool, there is not much physical labor, and if none is needed for cooking. A gallon of drinking water per person per day is more practical. The need for water increases as the temperatures rise and with more physical activity. To conserve water, it is best to avoid heat and labor as much as possible. Drinking alchohol, salt water, and urine increase the need for water. It is best to avoid these during a shortage. Also, if there is food available but not water, it should not be eaten. Digesting food requires water.

Getting drinking water from snow is one possibility. Ten portions of snow will yield around one portion of water. If the area of snow collection is relatively remote, it will most likely be free from contamination. During a water shortage, it is not wise to put snow directly into the mouth for melting, as this robs the body of warmth and energy. It is better to melt snow a bit at a time in a container over a fire. A container filled full of snow and placed over a fire will often melt only a small amount of the bottom, leaving the water to evaporate and burn the container. Rather, put snow into a heated container a bit at a time, and add more as it melts.

Pollution of the water supply is an issue of concern. Water can be contaminated with disease germs such as cholera, giardia cysts, typhoid, and dysentery. Chemical pollution can come from industry waste, pesticides, auto emissions, solvents, detergents, and radioactive particles. Prevention of this contamination is always the best solution, but beyond that, there is purification. There are several methods to purify water for drinking.

Boiling is the oldest and most basic way to purify water. Water should be boiled for at least five minutes. Add one minute to the five minute boiling time for each 1000 feet (300 meters) above sea level. A simpler and safe general rule is to just boil water for 10 minutes. Boiling will handle most organic contamination, except for giardia. The tough cysts of giardia can only be filtered out, destroyed with extreme heat, or destroyed with chemical treatment. Boiling is not successful with chemical or radioactive contamination.

To improve the taste of boiled water, one method is to add charcoal from a wood fire during boiling. Just filter out the charcoal before drinking. You may also add a pinch of salt to the water to make it taste better.

Distillation is another method of water purification. The process of distillation involves evaporating water, collecting the vapor, and condensing it again, thus leaving impurities behind.

Water distillation can be done in a variety of ways. One of the most basic ways is known as a "solar still". The word "still" is a short way of saying "distiller". A solar still is constructed including a piece of transparent or translucent material such as glass or plastic that allows sunlight to pass through. Water needing to be purified is placed in a container covered by the transparent material. Sunlight evaporates the water and the resulting vapor is condensed through cooling and collected. Various solar still designs exist.

Another more reliable distillation process, one that doesn't depend on sunlight, uses fire as a heat source. A closed container of water is heated over a flame. The only opening to this container is somewhere near the top. This opening connects to a length of tubing which is cooled by having its outside submersed in water, or by just being open to the air. At the remote end of the tube is another container for collecting the purified water. Boiling water evaporates into the tube, condenses back into liquid, and then drips out of the far end of the tube for collection. This whole assembly must be completely free of oils, solvents, or iodine, as not to pollute the result.

Filtering water is another useful method of water purification. A basic large-particle filter can be made by straining water through ordinary cloth, but this kind of filter does not clean out chemical, bacterial, or viral contamination. A more advanced filter is necessary for this.

Modern portable water filters often use space-age ceramics which contain tiny pores that block contamination from dirt, viruses, and cysts. Many also use a combination of methods including activated charcoal, special membranes, and iodine or silver compounds as an additional chemical treatment. These filters can be expensive and will often need to have their filter elements replaced after a certain amount of use. Regardless, filters can be quick, convenient, and effective tools to purify water.

One example of a large scale combination water filter is the British Berkefeld. This is a gravity fed water filter that can treat 30 gallons a day. It operates without electricity and can fully remove parasites, bacteria, odors, colors, and taste from contaminated water.

Chemical purification of water is another method. One of the most common chemicals capable of purifying water is household liquid bleach. Add 2 drops of bleach to every quart of clear water, or 8 drops to every gallon, and wait 30 minutes before use. If the water is cloudy, use twice as much bleach. Be sure to only use a pure bleach such as Clorox or Purex which contains 5.25 percent sodium hypochlorite. This is the active ingredient known as chlorine which purifies the water. If there has been anything else added to the bleach, do not use it for this purpose.

As mentioned before, chlorine is known to be somewhat toxic and can be harmful over time, yet any crisis situation will override this concern. Just keep in mind that the best water for health is naturally pure.

Liquid bleach does not store well. It loses its value quickly over time. For long-term storage, dry chlorine is a better choice. The technical name for dry chlorine is calcium hypochloride. If dry chlorine is kept in dry, cool, and air tight containers, it can last for up to 10 years.

Iodine is another chemical that is used to purify water. Iodine is dangerous and should not be used by pregnant women or people with thyroid problems.

Water purification tablets are a portable and convenient means to purify water chemically. These tablets can be found in most camping and outdoor supply shops. One noted drawback is that the storage life of the tablets is a factor. Their effectiveness will diminish over time.

Water that has been purified or sitting for a long time can often have a bland taste. To make the water more enjoyable, pour an amount of it back and forth from one container to another. This puts oxygen back into the water, giving it a better flavor.

Having water storage for a time of need is a wise precaution. Uncontaminated water kept in the dark within thick air-tight containers will last for many years.

The containers often most appropriate for water storage are food grade plastic containers. These food grade containers are often stamped "HDPE", meaning High Density Polythylene. They also ofen have a recycle symbol stamp with the number "2" in the middle.

One convenient choice is two-liter soda bottles, well rinsed out and dried. They are strong, easy to transport, usually abundant, usually free, and have a long storage life. Just be sure not to use bottles that previously contained diet soda. Aspartame or "NutraSweet" that is usually found in diet soda is toxic to humans and will leach into the water.

Plastic milk bottles are not a good choice for long-term water storage as they decay too rapidly and tend to crack after 6 months.

Glass containers are heavy and easier to break, although glass will maintain water quality better.

Water should be stored in dark and cool areas protected from freezing. Burying water in the ground can often be a good choice for various reasons. It is dark underground, the soil maintains a more constant cool temperature, and if anything should happen to a home supply, a well-placed underground water storage is secure.

You are free to copy, distribute, and alter this information as long as you allow everyone else to do the same.